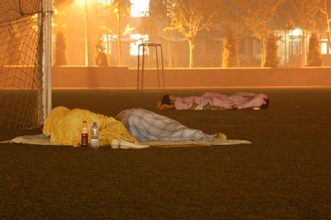 4:23 am, August 19, six photos were posted on the Tsinghua University BBS by a student with pen name Dawei Li. In his post, he said he took those photos with his own camera when he could not sleep in the middle of the night, and went to take a walk on campus and this is what he saw. (Click to see) These people who slept outside on campus are parents who came to Beijing to escort their child entering freshman year in Tsinghua. Those photos generated attention from news media such as news.sina.com.cn. According to media reports, all hotels near the campus were full and some parents from the countryside could not afford hotels in the city.