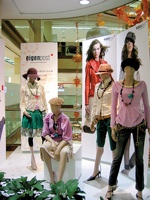 Strolling through downtown Shanghai, a number of brands familiar to Korean visitors stand out.

To name just a few, there is Paris Baguette, a bakery chain; Wa Bar, a bar franchise; E-mart, a discount chain; and BBQ, a fried chicken chain. Those Korean retailers, along with many others, are beefing up their presence in China, one of the world’s fastest-growing markets. As of late 2005, eight of 10 Korean businesses in China were manufacturers; retail and service firms accounted for just 12 percent, according to the Export-Import Bank of Korea.

Analysts say the retailing and service sectors have doubled in size in the past three years and the prospect for growth is higher than in manufacturing. Meanwhile, Korean investment in manufacturing is predicted to wane in China.

“China is accelerating its move to open up its service market and increase domestic demand,” said Chung Sang-eun, a senior researcher from the Samsung Economic Research Institute. [Full Text]