China-Japan Relations Are `Back on Track’ – Allen T. Cheng and Lily Nonomiya 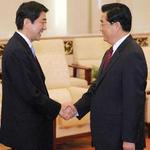 China-Japan relations are “back on track” since Shinzo Abe became Japanese Prime Minister in September, a top Chinese official said following a meeting between the countries’ two leaders in Hanoi.

“Since Prime Minister Abe’s visit to China,” Huang Xingyuan, Councilor with China’s Foreign Ministry, said today in Hanoi. “China-Japan relations have improved dramatically and are now back on track.”

Abe and Hu are attending a meeting of leaders of the 21- member Asia-Pacific Economic Cooperation forum in Hanoi. The international meeting is Abe’s first since taking the helm from Junichiro Koizumi as prime minister in September.
[Full Text]