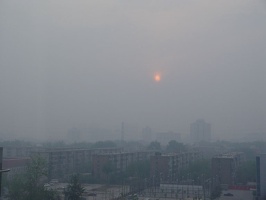 From The South China Morning Post, via A Glimpse of the World:

The mainland’s environmental problems are grave and local governments are bent on economic growth at the expense of the country’s ecology, according to the majority of respondents to a nationwide online survey.

The survey, organised by the China Youth Daily and Tencent, China’s largest instant messaging service provider, found that about 95 per cent of the 6,600 respondents rated the nation’s environmental degradation as severe and 70 per cent felt local government paid little regard to green priorities.

Water pollution topped the list of respondents’ concerns, with 87.1 per cent of people worried about its effects, followed by air pollution, domestic and industrial waste, food contamination, desertification and noise pollution. [Full Text]