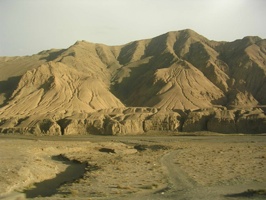 Thanks to China analyst David Cowhig for following information:

Tibet (that is traditional Tibet — the Qinghai – Tibet plateau region) already supplies about one-quarter (down from nearly one half several decades ago according to some studies) of the Yellow River which originates on the Qinghai Tibet plateau. This issue ties into the water shortages, the most important constraint on China’s development. Chinese scientists over the last twenty years have done many studies of the Qinghai Tibet plateau and its water resources. Many of these scientists see global climate change between the reduction in flow from the plateau to the Yellow River over the past several decades.

Although the climate model and recent decades of experience suggest that global climate change will make the Qinghai Tibet plateau somewhat warmer and wetter as the glaciers shrink over the next decades, some parts of the vast plateau have different microclimates and trends. The changes in the glaciers will increase glacial melt runoff to mid century, after which it will decline.

This seems to be part of a world wide trend. Science magazine this year has had articles about shrinking glaciers and climate trends in Greenland and the Andes this year. While this list is Greenland – Pol or Andes – Pol, it is very interesting that what the Chinese scientists are seeing on the Qinghai-Tibet plateau parallels what scientists studying Greenland and the Andes. Not just projections in their models, but on the ground facts from monitoring these regions over recent decades. The oases of Xinjiang also depend upon glacial melt, so the fate of China’s glaciers will be important for that region as well.

Prev | Table of Contents | Next

Ice sheets are often assumed to respond slowly to climate change, with dynamic response times measured in centuries to millennia. On page 1756 of this issue, however, Ekstr√∂m et al. (1) describe a dramatic increase in glacial seismicity over the past several years, which coincides with the acceleration of many of Greenland’s major outlet glaciers (2-4). The rapidity of these changes counters the view of a sluggishly responding ice sheet and indicates that outlet glacier dynamics can respond swiftly to climate change with consequent increases in sea level. Over the past decade alone, glacier acceleration has increased Greenland’s contribution to sealevel rise by more than 0.3 mm year-1 (2).

Using teleseismic data from 1999 and 2000, Ekstr√∂m et al. (5) previously identified earthquakes associated with glacial flow–“glacialquakes.” Their more-recent observations cover more than a decade (1993 to 2005) and reveal a seasonal signal, with summer seismicity nearly five times greater than in winter. They also found a modest increase in seismicity in the late 1990s that was followed by a rapid increase from 2002 onwards, with 2005 producing nearly as many events as the combined total for 1993 through 1996.

Prev | Table of Contents | Next

Threats to Water Supplies in the Tropical Andes

According to general circulation models of future climate in a world with double the preindustrial carbon dioxide (CO2) concentrations, the rate of warming in the lower troposphere will increase with altitude. Thus, temperatures will rise more in the high mountains than at lower elevations (see the figure) (1). Maximum temperature increases are predicted to occur in the high mountains of Ecuador, Peru, Bolivia, and northern Chile. If the models are correct, the changes will have important consequences for mountain glaciers and for communities that rely on glacier-fed water supplies.

Is there evidence that temperatures are changing more at higher than at lower elevations? Although surface temperatures may not be the same as in the free air, in high mountain regions the differences are small (2), and changes in temperature should thus be similar at the surface and in the adjacent free air. Unfortunately, few instrumental observations are available above ~4000 m. The magnitude of recent temperature change in the highest mountains is therefore poorly documented. An analysis of 268 mountain station records between 1¬∞N and 23¬∞S along the tropical Andes indicates a temperature increase of 0.11¬∞C/decade (compared with the global average of 0.06¬∞C/decade) between 1939 and 1998; 8 of the 12 warmest years were recorded in the last 16 years of this period (3). Further insight can be obtained from glaciers and ice caps in the very highest mountain regions, which are strongly affected by rising temperatures. In these high-altitude areas, ice masses are declining rapidly (4-6). Indeed, glacier retreat is under way in all Andean countries, from Columbia and Venezuela to Chile (7).

the processes involved in mass-balance changes at any one location are complex, but temperature is a good proxy (12) for all these processes, and most of the observed changes are linked to the rise in temperature over recent decades (5). Further warming of the magnitude shown in the figure will thus have a strong negative impact on glaciers throughout the Cordillera of North and South America. Many glaciers may completely disappear in the next few decades, with important consequences for people living in the region (7).

Although an increase in glacier melting initially increases runoff, the disappearance of glaciers will cause very abrupt changes in stream-flow, because of the lack of a glacial buffer during the dry season. This will affect the availability of drinking water, and of water for agriculture and hydropower production.

Variations in the water reaching the rivers will vary according to glacier size (smaller glaciers melt faster) and other factors such as precipitation and evaporation rates and different regional climates and their changes within the vast Qinghai-Tibet plateau.

The areas in which the Yellow River originates (the Three Rivers area in which the Mekong, Yellow and Yangtze rivers originate has seen warmer and drier weather over the last 30 years — the drying trends is not typical of the plateau as a whole (something to do with much higher evaporation rates and only very slightly higher precipitation). This variation from the typical in global warming in not unique — I remember seeing projections of global warming in the Arctic, which, although it is projected to warm faster than the Earth as a whole, some parts of the Arctic will actually become cooler (some areas of Greenland as I recall.)

For the three rivers source area, over the past three decades Chinese scientists have seen a very gradual change which they find significant – a warming at the rate of 1/3 of a degree Celsius per decade. The scientists point to this as the main cause for the reduced flow from the Qinghai – Tibet plateau (now about one-quarter of the flow – waste and overuse downstream is another major reason for reduced flow and indeed drying out of the river sometimes over the past decade).

A secondary reason for the reduced flow, say Chinese scientists, is desertification on the plateau due to drier weather, overgrazing (some estimate the Qinghai-Tibet plateau is overgrazed to 50% above its carrying capacity, and a plague of little furry creatures (rodents ??) who have have been chomping up the plateau grasslands in increasing numbers. The decline of grasslands and marshes reduced the storage capacity of the plateau and so the eventual contribution of the Qinghai – Tibet plateau to the Yellow River. Some scientists argue that a project to restore the grasslands would be more cost effective than the western branch of the south to north water diversion project and more ecologically sound and suggest doing the marsh restoration project first or instead of the western branch project.

The western branch of the south to north water project is one effort to help solve the Yellow River’s problem, although some scientists argue that it is not the right solution.