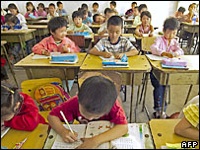 From BBC News: China is to abolish tuition and other fees for 150 million rural students, in a bid to narrow the gap between wealthy coastal provinces and poorer regions.

The students will be exempt from tuition fees over the course of their compulsory nine-year education.

But children of rural families who have migrated to China's booming cities will not be included.

The new policy is "part of a major move to relieve the financial burden of farmers and to develop a new countryside," the state-owned newspaper said.

In the first phase of the programme, which took effect this spring, more than 50m students living in western provinces - some of China's poorest - were exempted. [Full Text]