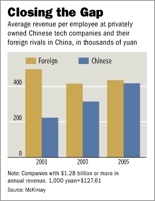 China’s technology companies are closing the gap with their foreign rivals in productivity, positioning themselves to become a bigger threat to multinationals both in China and abroad, according to a survey by McKinsey & Co. and China’s Tsinghua University.

The survey suggests that Chinese tech companies are gaining ground on multinationals in terms of size and in terms of the efficiency of their operations, as they learn to fine-tune processes that in the past relied strictly on China’s abundance of cheap labor to compete. It also found that Chinese tech companies are increasingly moving up from low and midprice product segments, which they have long dominated, into higher-end product segments that foreign companies have long dominated.

“This is a major wake-up call for multinationals,” said Ingo Beyer von Morgenstern, the Shanghai-based McKinsey director who oversees the firm’s technology practice in Asia. [Full Text, subscribers only]