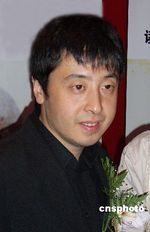 In an open letter to Zhang, director Zhang Yimou’s long-time producer, who also produced the box office hit “Curse of the Golden Flower“, Jia responded to Zhang’s comment in a newspaper that Jia’s film “Still Life” had won the Golden Lion because Venice Film Festival director Marco Muller had invested in it. „ÄÄ

In a report carried by Monday’s Chongqing Evening Post, Zhang Weiping was quoted as saying that Jia Zhangke and Marco Muller manipulated the award of the top prize to “Still Life” at the Venice Film Festival earlier this year.[Full Text]

How China Is Remaking the Global Film Industry

Hollywood in China, China in Hollywood

Why Censors Are Scared of Jia Zhangke’s Film