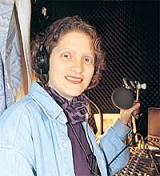 This week’s edition of CDT ChinaCast‘s Foreign Correspondents Series features Jocelyn Ford, former China correspondent for American Public Media’s Marketplace Beijing bureau. Ford reported for Marketplace for over 10 years, including five years covering China. Most of her stories focused on the dramatic social and economic changes in China, the vast gap between rural and urban areas, and clashes between people as they struggle to live in a complex and changing society. Ford is also one of the few foreign reporters who has worked within the Chinese state media. In this edition, our first live recording in a studio, Ford will talk about the work environment at China Radio International, the Chinese national public radio station, where she found a lack of creativity and abundant censorship. Her live show about people’s reactions to September 11 in China created problems for her and caused her to leave her job.

Listen to the interview here.

– Listen to some of Jocelyn Ford’s reports, such as her stories about Land rights in China .

CDT ChinaCast is a podcast series of short and informal conversations with journalists, business people, artists and others doing interesting work in China. For the initial series, China Digital Times bloggers will interview foreign correspondents about their lives and work. The interviews do not aspire to find solutions to the many contradictions and challenges facing China in the 21st century – rather, we hope to offer a personal look at day-to-day life in one of the most complex and dynamic countries on earth. How do foreign reporters go about the business of covering China? What are some of the most unusual stories that have come out of the country in recent years? And what do expat journalists living in Beijing or Shanghai do for fun?

– To subscribe to our podcasts, see our Podcast page.