A thorough look through Google search results for “Huadu” “teacher” and “protest” suggests a media blackout, which the teachers seem to have expected, as the story has been reported on closely at the 21Teacher internet forum, at least until comments were turned off early this afternoon…Posts at 21Teacher estimate that between seven hundred to a thousand teachers appeared on the Huadu Plaza steps at nine this morning, and four hundred patrol and riot police”who some spectators say got violent with at least one teacher”being surrounded by spectators reportedly numbering between two to ten thousand, many of which it was speculated were also teachers. One statement not being refuted online is that the teachers have remained peaceful, breaking their “silent sit-in” only to sing China’s national anthem, The Internationale.[Full Text] 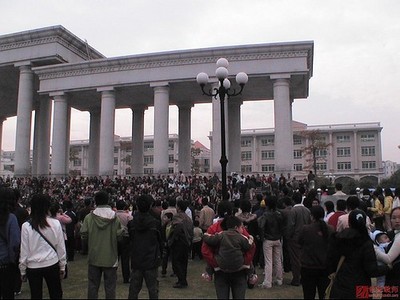