Spit’s Out, Polish In – Mei Fong 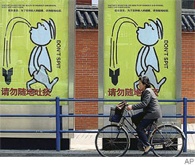 From Wall Street Journal (photo: a “Don’t Spit” campaign during SARS, via wsj.com):

On the streets of the country’s capital, spitting — often complete with loud throat-clearing, gurgling and an arc of phlegm — is a frequent occurrence. The deeply ingrained habit is found among young and old and crosses class lines.

Now Chinese officials are mounting a renewed campaign to abolish this custom and other less-than-appealing practices — including cutting in line and littering — all to get the city camera-ready for the 2008 Games.

This week, Beijing city authorities announced they will step up efforts to fine spitters as much as 50 yuan, or $6.45, when they are caught doing the act in public — a hefty sum by Beijing standards and equivalent to a day’s wages for many laborers. Laws against spitting have existed for years, but haven’t been strictly enforced. [Full Text, subscribers only]