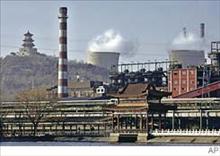 From The Wall Street Journal:

The 2008 Summer Olympics isn’t the only thing looming on Beijing’s horizon. There’s also a lot of pollution from neighbors clouding the city’s air.

Even if the city does all that it can, Beijing officials have recently acknowledged that without the cooperation of nearby provinces such as Shanxi, Shandong, Inner Mongolia and Hebei, there’s a good chance that China’s promise of a green Olympics will instead be a hazy shade of gray.

These neighboring provinces are among the most polluted regions in the world, infamous for coal mining, power plants, cement plants and steel coking. These are all pillar industries that are essential to fueling China’s growth but unfortunately rely on burning huge amounts of dirty coal.[Full Text]