Is the Price for China’s Economic Boom Too High? – EuroNews 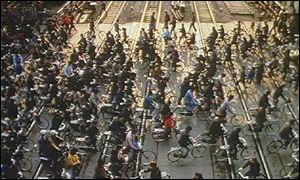 For the last four years, China’s rapid rate of growth has been dramatic. In 2006 GDP was running at an impressive 10,7% – but is the economy in danger of running out of control to the detriment of both human and natural resources? Two decades of change from a command to a more capitalistic-style economy have created new problems, particularly unemployment.

Currently 84 million people living in the cities are without work, while in the countryside it is 100 million. Each year more than 1.4 million people with degrees and other qualifications are entering the jobs market but with little prospect of finding employment.

Now 40% of the country’s wealth is in the hands of a mere 10% of the population. The discrepancy between the incomes of the rich and poor has widened and is now greater than even in firmly entrenched capitalist countries such as the US. [Full Text]