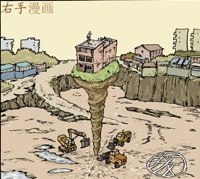 Even after the Central Propaganda Department’s order to the press banning independent reporting on Chongqing’s “Nail House” event, many Chinese media continue to run commentary and discussions on this case, generally exploring its relationship to the Property Law. David Kelly has translated a series of article titles from Chinese media, just to illustrate that the coincidence in timing of this demolition case and the announcement of the Law has raised its profile.

(Closing line: “That loud slap in the face from Chongqing’s Jiulongpo District Court ruling, and the heavy kicks from Professor Jiang Ping, remind us that the future is bright in the property rights era, but also tortuous and difficult. We need an indomitable ‘nail spirit.'”).

The last of these is a round table with interesting discussants like Yao Yang, Yin Tian, Sheng Hong, and others.

Local Official to Nailhouse Owner: “Whose Sky Are You Living Under?”

A Nail House in the Heart of Beijing