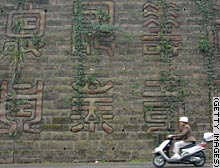 The number of people in China who can’t read has shot up to 116 million, wiping out years of hard-won gains against illiteracy as rural poor leave the farm and school for work in the city, state media said Monday.

Migrant workers in China’s urban centers do not have access to public education, health care and other basic social services.

“The situation is worrying,” the paper quoted Gao Xuegui, a Ministry of Education official who focuses on illiteracy, as saying. “Illiteracy is not only a matter of education, but also has a great social impact.”

Gao said another reason for the backsliding was a lack of adequate funding, and the fact that earlier successes in fighting illiteracy lead some local governments to abandon their literacy programs. [Full Text]

UPDATE: Read also comments from Jeremy Wallace on the Science and Politics blog:

With construction and other non-skilled labor in cities the most desirable outlet for many rural-born children, it is not surprising that they are quitting school to come to the cities earlier to start earning for themselves and family. Illiteracy shooting up 30 million in 7 years is going to lock in inequality.