Photos: Police Armored Vehicle Used for the First Time In The Streets Of Chongqing – Feng Chao

From Chongqing Morning Post, via ChinaNews.com: Police Armored Vehicles used for the first time in the streets of Chongqing. [Full text in Chinese] 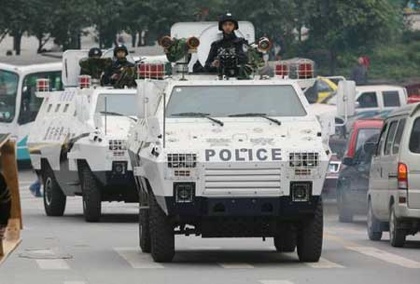 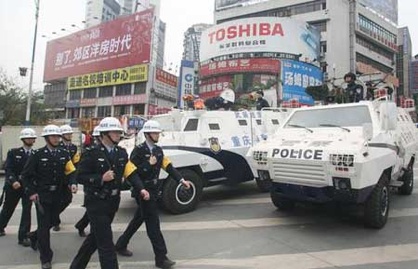 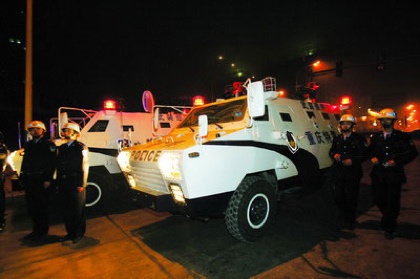 Excerpt from the original article from Chongqing Morning Post, translated by CDT:

….. Both police armored vehicles on the streets yesterday were made in Chongqing. Xiao Zhang, a member of the Police Special Force told the reporter that there are five cameras and two spotlights on each vehicle. Therefore, on-duty police officers will be able to see every angle within the vehicle. There are no blind spots.

The body of the armored vehicle is many-angled. There are many sharp angles sticking out, which can be used to smash barricades. The entire body is reinforced by a thick layer of steel.

In the armored vehicle, the reporter saw a large amount of electronic equipment in addition to seats. All this equipment is ready for any emergency.

On both sides of the armored vehicle, there are six round holes which can be covered by bullet proof steel sheets. “These are observation holes. Police can observe the situation outside from within the vehicle. In special situations, these holes can be used for shooting from. ”

According to police sources, starting from this year, every district and county of Chongqing city has established professional police patrols. There are more than 1600 professional patrols on the streets everyday. 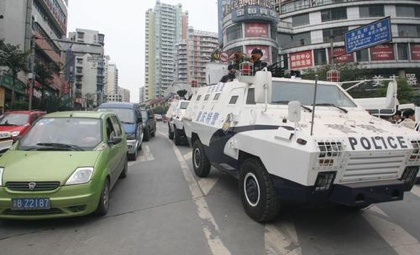