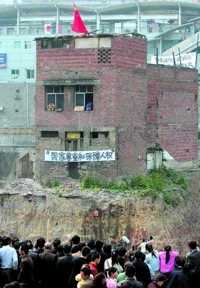 ESWN just translated another long article from the Chinese media about the Chongqing “Nail House”: A Southern Weekend report titled “The Inside Investigation of the Chongqing ‘Nail House'” written by Zhang Rui (Âº†ÊÇ¶):

On the evening of March 27, Yang Wu, the owner of the building on number 17, Hexing Road, Yangjiaping, Chongqing, appeared on the roof of his building. This was his seventh day on his “island.”

About two hours before, this owner of the so-called “most awesome nail house in history” appeared at his window and made his characteristic move — holding his fist tightly — and yelled: “I want to speak to the mayor!” Then he picked up his mobile telephone and called several reporters from whom he had gotten telephone numbers and he said excitedly: “I am Yang Wu of Chongqing. I want to see Wang Yang (city party secretary)!”

At that moment, Yang Wu calmed again and looked at the deep ditch around him. His stern look made him look like a castle owner inspecting the moat around his fortress. [Full Text]