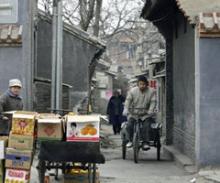 From AFP via ChannelnewsAsia:

The demolition of a supposedly protected section of Beijing’s old city began this week, triggering renewed outrage over the demise of the Chinese capital’s historic courtyards and alleyways.

The homes in Beijing’s Dongsi Batiao are being razed to make way for a new residential development, crystallising the plight of the narrow maze-like alleys known as hutongs that once dominated the ancient city centre.

State media have seized on the destruction of the site, in an officially protected cultural preservation district, as an example of official failure to protect hutongs from an ongoing property boom.[Full Text]

– Read also a personal look at this demolition order from Richard Spencer, who lives nearby. Read also about the planned demolition of a less glamorous section of Beijing in “Olympic construction will send Beijing poor packing” from Reuters:

Having survived the city’s relentless modernization drive, local authorities are determined the shanty-towns — home to many of the millions of migrant workers flooding into Beijing to find employment — won’t survive to tarnish the showcase capital’s image during the Olympics.

Branding them “illegal urban villages”, town planners demolished 55 of them in 2006, and started clearing another 25 as part of the city’s “beautification” work. [Full text]

Update: Asia Times writes about the new generation of talented Chinese architects who may be able to help change the way urban design is carried out in China’s craze for redevelopment.