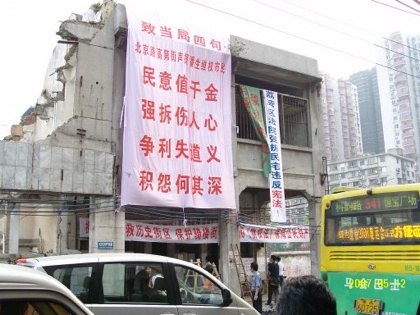 Translation of the banner:

Public opinion is worth a thousand pounds of gold

(The government which) grabs profits (from citizens) has no morality

The accumulated resentment is profound

Some said there is a "nail house" in Guangzhou again. But Pan Weiye, the protagonist of this incident, refuses to be classified as "nail". He argues that what he wants is an apartment of the same area in this district.

Pan Weiye's home is a house in Xiguan, an area famous by the wealth class in the past. It was located in the western side of the inner city of Guangzhou, a district for foreign trade in the Ming and Qing Dynasties. Pan's house is a historical building and his family has been living here for three generations. There were five families before eviction but now only a family of seven members stays.

Pan says he feels angry with being cheated by government. That is why he refuses to move. [Full Text]