Behind the Boom In Chinese Fireworks – James T. Areddy 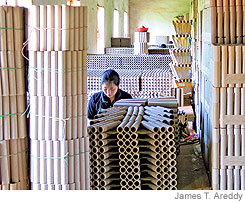 Across this sprawling, upwardly mobile country, towns proudly proclaim they are what they make. Wenzhou calls itself China’s Shoe Capital. Datang, a bit more modestly, lays claim to Sock City. And then there is Liuyang — Fireworks Capital of the World.

Nearly all the celebratory explosions set off by Americans — from the lowly New Year’s firecracker to next week’s mighty Fourth of July mortar — originate in Liuyang, a county nestled into the red hills and bamboo forests of Hunan. Local lore has it that Li Tian invented firecrackers hereabouts 1,400 years ago, and today statues of Inventor Li outnumber those of Chairman Mao. China’s Ministry of Commerce estimates that the country produces 75% of the world’s fireworks; Liuyang says it makes 70% of that — accounting for more than half of the globe’s explosions-for-fun-and-pageantry market.

“In every family, at least one person works with fireworks companies,” says 30-year industry veteran Yu Shunan, owner of Liuyang’s Jiahua Fireworks Manufacturing Co., which exports more than half its output to the U.S. Some 210,000 people, 60% of Liuyang’s population, work at home and at 1,500 factories cutting paper, forming cardboard tubes, twisting wicks and — most risky of all — stuffing gunpowder into enough fireworks to fill 29 million cases annually. [Full Text, Subscription only]