Hu Jintao and other high-ranking leaders appear in a sea of white dress shirts, conspicuously sans the usual suits, at a Central Party School meeting on June 25. Xinhua, the government’s official press agency, interprets for its readers the higher message, running a story that both reports and comments on the mass wardrobe shift. CDT translates the article:

While viewing News Hookup on CCTV on the night of June 25, the eyes can’t help but take notice: as General Secretary Hu Jintao was giving his important speech, he had on a white collared shirt and not the usual dark-colored suit. Among the other Central Committee leaders sharing the stage, no one wore a suit or a tie either, all appearing in uniform simple attire. As seen on television, seemingly all the attendees were dressed down. The scene strikes viewers with a sense of closeness and warmth. 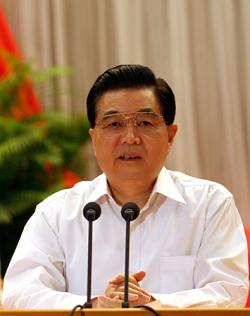 Photos by Fan Rujun for Xinhua

Whether or not to wear a suit is completely determined by the occasion; there is no set rule. At some important conferences or events, formal dress is not only a necessity of etiquette but is also a matter of showing respect to others; however, at other occasions, dress can be de-emphasized. The Central Committee leaders’ gesture is an expression of practicality. However, in recent years, sometimes too much emphasis has been placed on etiquette in certain places. Some occasions that required without exception formal attire resulted in not only causing attendees inconvenience but also engendering great waste. For example, the term “suit temperature” coined a few years ago refers to how certain places ( e.g. the conference room, the office) set the air conditioner at a temperature suitable for wearing suits. I don’t know exactly what that temperature is, but wearing suits in the heat of summer must require the air conditioner to be set at a very low temperature. The direct consequence of this is an increase in energy consumption. China is a country that consumes a lot of power but at the same time is also deficient of power. Energy conservation should start with making little changes, done by every person.

Party History and What The People Can’t be Told (Updated)

Person of the Week: Cai Xia