Qipan Jing town is well known for its proven trove of more than 40 mineral resources, including 960 million tons of coal, 3.3 million tons of quartz stone, 5.2 million tons of iron, etc. Such resources have brought wealth to Qipan Jing but have also attracted predators, as state, private and even illegal industries all have been digging up the mineral resources they want. However, not much attention was paid to the lives of the residents living in Qipan Jing. For example, when local taxi drivers held a strike for three days, no Chinese media covered it as you can see by searching Google. A traveling blogger, Laohu Miao (Tiger Temple) passed by as an eye-witness to what happened during the strike. From Laohu Miao, translated by CDT:

From September 16th till today, taxi drivers started a three-day strike in Qipan Jing, an industrial town located on the western the Inner Mongolia border. (View a satellite map) I chatted with a female police officer there. She said, “Taxi drivers strike!” I asked why. The reason was because the government issued too many taxi licenses.

Qipan Jing is not a big town in the desert grassland. However, there are unique mineral resources including ferro silicon, so the town is called the “capital of silicon.” Probably because of this, the town is small but busy. One proof of this is that there are over 400 taxis running in the town. 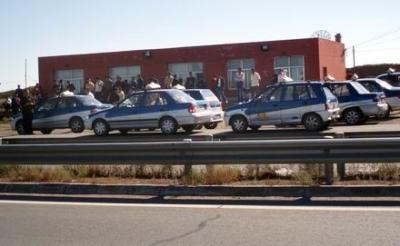 (Taxi drivers and the policemen standing together, even talking and laughing together in a friendly way. However, no taxis are left. The drivers’ determination is as strong as iron.)

On the 18th, I rode my bike by here. Outside of a highway toll I saw hundreds of cars lined up on one side of the road, as long as a dragon. At the head and the bottom of the line there were police cars stationed. I was very curious and asked a female officer, “Purchase new cars? Why do they need police cars to lead them? Was it the government trying to do something big? Was the government doing good things for the people?”

She said, “on the contrary, the government issued excessive taxi licenses. It sparked all taxi drivers to protest starting from the 16th.” “Drivers in the entire town are striking?” I asked. “Almost,” she said. Later, I learned another strike was being held around Wuhai, although I was not sure about the exact location.

I rode alongside the line of taxis. Then the taxi drivers started to ask about my identity. Probably because I dressed oddly with a muddy face, they thought I was a reporter. “Reporter’s reaction is really fast!” they said. 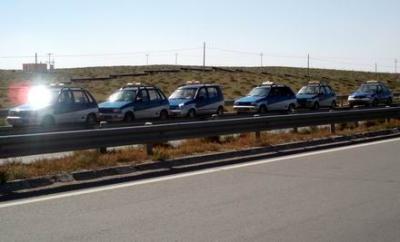 (Taxis in strike were all cleaned. They lined up in front of the highway toll for miles.)

I took out the camera and started to shoot, which upset the police. Two policemen crossed the road parapet and brusquely asked me, “What are you doing here?” I politely answered, “social surveys.” Seeing that I had no malicious intentions, the policemen relaxed. After learning that I rode my bike all the way from Beijing to here, they admired my efforts and started to care about my transportation. They also helped me find a route into town. I asked why there is such a strike here. Policemen said, “There used to be more than enough taxis. Now 200 more taxi licenses were issued.” I said, “A fight for food. Of course that angers the police.” I asked, “Is there good solution?” Policemen said, “No.”

Local policemen have a pure look. I can explore without interference. The same day I dined in a local restaurant. People there looked out at the street. There were no taxis. How long will the strike last? Watch for more updates from my blog.