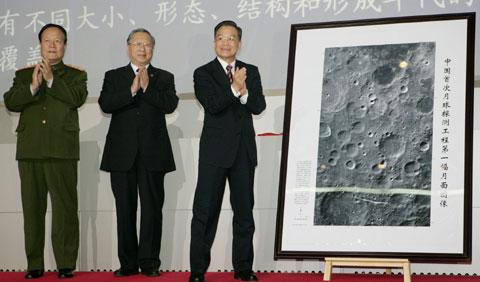 “Chinese people’s dream of flying to the moon for more than 1,000 years is beginning to materialise,” Wen said in a speech carried by a government website.

“It showcases eloquently that the Chinese people have the will, the ambition and the capability to write new splendid chapters while ascending the science and technology summit.”

China space officials have said repeatedly that they hope to put a man on the moon around 2020. However, top political leaders have so far not confirmed that this is an official national objective. [Full Text]

[Image: Chinese Premier Wen Jiabao stands next to the first moon photo produced by Chang’e I, from China Daily]