Blogger Laohu Miao (ËÄÅËôéÂ∫ô ) rushed back from his trip to the west to catch the annual Chinese Blogger Conference, which he had missed the previous two years. Writing on his blog, 24 Hours Online, he described his conference speech, delivered during a panel on the relationship between bloggers and traditional journalists, as neither left wing nor right wing, neither white nor black, but rather focused on a single, neutral observation: “The current time is the most restrictive period of speech I’ve ever experienced.” See his photos and post (Chinese) here: 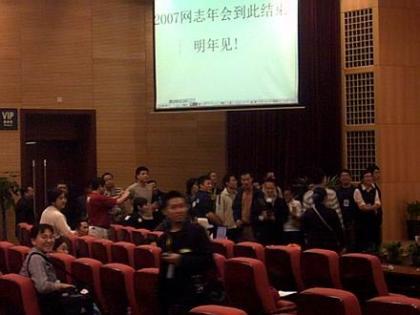 [Image source: 24 Hours Online. Caption: “When the conference ended, many young faces appeared. They were like the sun at 8 or 9 in the morning. An exciting moment!”]