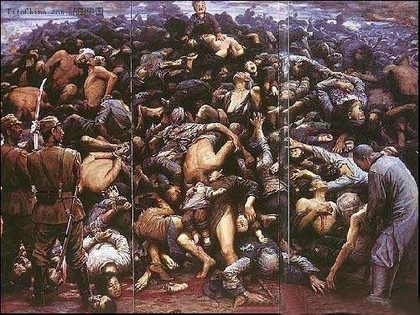 Shortly after capturing Nanjing in December 1937, the Japanese army gathered together 1,300 Chinese soldiers and civilians at the city’s Taiping Gate. They then killed them.

They blew them up with landmines then doused them with petrol before setting them alight, finally using bayonets to finish off anyone still left alive.

Continue to watch part of a documentary series on the Nanking (Nanjing) Massacre produced by the Hong Kong TV Station RTHK to commemorate the 70th Anniversary of the massacre .

In the following video clip from YouTube, best-selling author Iris Chang testifies at a Mock Grand Jury for the Nanjing Massacre. This recording was done by videographer Elliott Chuang at a public event in San Francisco, sponsored by the “Rape of Nanking” Redress Coalition on October 24, 2003.


Seventy years ago this December 13th, the Japanese Imperial Army began its seizure of Nanjing, the capital of the Republic of China. Japanese troops killed remnant Chinese soldiers in violation of the laws of war, murdered Chinese civilians, raped Chinese women, and destroyed or stole Chinese property on a scale that will never be known. The violence and destruction was extensive, despite the efforts of some Japanese to minimize the scale. We know this because there was a relatively large foreign community in Nanjing at the time that bore witness to the carnage. Other Japanese have themselves worked assiduously to reconstruct the historical record.

Similar disasters occurred in other towns of the Lower Yangzi and in East China, but what happened in Nanjing has become emblematic of the narratives of the inhumanity of the Japanese aggression and the sorrow of Chinese victimization. Those narratives continue to this day. Indeed, Timothy Brook writes of Nanjing that “the politics of memory are so powerful at this site that what actually happened in December 1937 almost doesn’t matter to the kind of record either side chooses to create.”1

Beneath the plane of political memory, the history of the war, of which the Nanjing Massacre is one small part, raises other questions that are pertinent to the present day. There is the issue of why the Japanese army behaved with such apparent barbarism in seizing places like Nanjing and thereafter defending its occupation against Nationalist and Communist insurgencies. [Full text]