“Land is the Most Important Human Right for Farmers” – Dongnangang Villagers 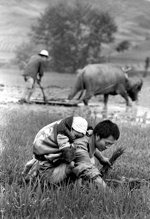 The following document is the announcement of land reclamation by 40, 000 farmers in Fujin City of Heilongjiang Province, first published on overseas Chinese news site Boxun.com on December 9, 2007. Translated from Boxun by Linjun Fan.

We, the 40,000 farmers of 72 villages of Fujin City in Heilongjiang Province, announced our claim of ownership to the 250,000 acres of farming and waste land, which has been forcibly taken away by local government officials since 1994, as follows:

First, we, the 40,000 farmers of 72 villages, own the 250,000 acres of land. The encroached-upon collective land should be divided evenly by households and possessed by us farmers.

Third, more than 900 farmers of Dongnangang Village of Chang’an Town have already recovered 2,500 acres of encroached-upon land and divided it evenly among all farmers of the village. They have also dismissed their former village head who violated the farmers’ collective interest. All other villages will follow its suit in recovering and dividing their collective land. All villager committees and other self-governance organizations elected by farmers should support this land ownership right. They should organize and lead all farmers to reclaim the ownership of the collective land of their village and divide it evenly. They should try their best to defend farmers’ land ownership, especially when government officials collude with developers in an effort to forcibly take their land away.

Fourth, all government officials should respect farmers’ pioneering spirit and protect various rights of their land ownership, just as they led farmers to launch the land revolution in the 1940s and 50s and supported farmers’ right to make their own farming decisions in the early 1980s. Giving complete land ownership to farmers is the most effective and thorough policy to benefit them. It’s not suitable currently to farm land collectively in China’s rural areas. It’s up to us farmers to organize collective operations ourselves if the time is right in the future.

Fifth, rural collective land should be owned by all farmers that live in the villages. The farmers have the right to decide the way of land ownership. The so-called “collective ownership” has actually deprived farmers of their rights as land owners for a long time. Government officials and developers of Fujin City have been unscrupulously encroaching on farmers’ land in the name of national or local interest. They have actually become the landlords, and farmers have been forced to become serfs. We decided to change this structure of land ownership, and protect the land rights of farmers through family ownership or individual ownership.

Sixth, we believe that giving land ownership to farmers will bring about great changes in China’s rural areas, similar to the achievements seen when farmers were granted the right to farm the land at will in the early years of Reform and Opening-Up. We farmers have suffered enough from being plundered and bullied. We now believe that only when the farmers take action to protect their rights themselves, can their rights be respected.

Land is the lifeblood of farmers. It’s the most important human right of farmers. Only when we own the land, can we have a place to settle. Only when the farmers are settled, can China’s rural areas and the country as a whole can be settled.

“This is a potentially very significant development, one that could affect and reshape some of the foundational political-economy arrangements in the PRC since the mid-1950s,” says Professor Fei-Ling Wang of the Sam Nunn School of International Affairs, Georgia Institute of Technology. “For those who believe that market economy tends to give birth to the sense of rights (individual rights and property rights) and lead to the rise of rule of law and political democracy, this is a great case to be watched. If the movement indeed takes off, it will be a true, bottom-up land revolution. It is especially profound, given that the CCP now reemphasizes heavily the ‘Great banner of socialism with Chinese characteristics.'”

Please also see the UPDATE news on this event.