Clashes With the Chengguan in Two Cities

Following public outrage over the beating death of a bystander in Tianmen by “urban management” (chengguan) officials, more stories of abuse by the forces are coming out. RFA Unplugged covers a recent incident reported in the domestic Chinese media:

According to China’s Nanguo Zaobao newspaper, on the afternoon of Feb. 23, urban management officers, also known as the chengguan, from the Liangqing District confiscated the vegetables belonging to a peddler. The thing happened at the Qianjin Road in the Dashatian area. The middle-aged peddler then picked up a brick to hit the officers’ car. The officers jumped out of the car, trying to pull the peddler into their car. In the process, a witness said, four or five urban management officers beat up the peddler with sugar cane, or kicked him. Angry bystanders encircled the two cars of the officers, blocking their exit.

About 5:30 p.m., at the intersection between Qianjin Road and Bailing Road, there were about several hundreds of watchers with two police cars at the scene. Many police were trying to disperse the crowd but the mob got more and more emotional. The confrontation lasted until 7 p.m. and people gradually left the scene. 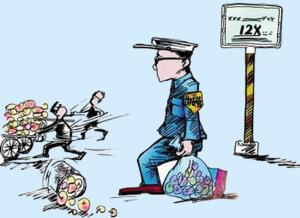 A Song for Xia Junfeng’s Father