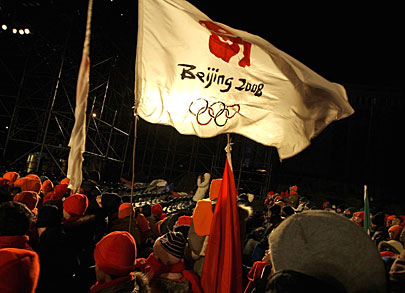 A Beijing Olympic Games flag shines in the light during a New Year’s celebration in Beijing on Dec. 31, 2007. (ODED BALILTY/AP)

Chinese officials claim that in January they uncovered an alleged terrorist plot, based out of Urumqi, to bomb the Olympics. From Canadian Press:

Wang Lequan, the top official in the western region of Xinjiang, says today a Jan. 27 raid in the regional capital Urumqi had seized materials that showed the plotters’ purpose was specifically to sabotage the staging of the Games.

The Global Times newspaper published by the Communist Party earlier reported the group had planned bombings and other violent terrorist incidents on Feb. 5, the last business day before the start of the Lunar New Year holiday, but the paper had made no mention of the Olympics.

Here is AP’s story, via star.com.

Also related see “No Let-Up in Fight Against Forces of Terror” from China Daily and “China parliament delegates call for Xinjiang crackdown: report” from AFP.

For a more skeptical view of the fight against East Turkestan “terrorists” read “The Annual Terrorism Smackdown” from the Opposite End of China blog.