Fears and Tears: Interview with the Dalai Lama 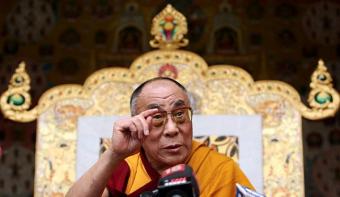 In an exclusive interview with Newsweek reporters Melinda Liu and Sudip Mazumda, the Dalai Lama talks about the violence in Tibet, his vision of the future, and how he manages to sleep in spite of his distress over the killings:

As news spread of massive Chinese troop movements into Tibet, and of hundreds of arrests, Chinese Premier Wen Jiabao told British Prime Minister Gordon Brown he was willing to talk with the exiled Tibetan leader the Dalai Lama if he renounced violence and gave up the idea of an independent Tibet — conditions the Dalai Lama has met with past statements. During an exclusive wide-ranging 45-minute interview with NEWSWEEK’s Melinda Liu and Sudip Mazumdar in the headquarters of the Tibetan government-in-exile in Dharamsala, India, the Dalai Lama talked about his willingness to negotiate with Beijing, his fears for the future, and how some government officials in China have sent him private messages of sympathy. Excerpts:

NEWSWEEK: Do you think Chinese officials still hope their problems in Tibet will disappear after you pass away?

The Dalai Lama: I don’t know. I totally disagree with the view that the Tibet struggle will die, and there will be no hope for Tibet, after the Dalai Lama passes away. Both inside and outside [Tibet], the older generation may go away, but the newer generations carry the same spirit, sometimes it’s even stronger. So after my death a younger generation will come up.

If Wen Jiabao or [China’s President] Hu Jintao were sitting in this room in front of you, what would say to them?

I always like to quote Deng Xiaoping and say: please seek truth from facts. It is very important. I would urge them to find out what is really going on in Tibetan minds and what is happening on the ground. This I want to tell the prime minister Wen Jiabao, if he were to come here. Of course I have great respect for both, particularly Wen Jiabao. He seems very gentle. I would also ask him, “Please prove your recent accusations [that the Dalai Lama instigated the unrest in Tibet.]” (Laughs)