The Taelspin on Tibet: The Chinese Response to Foreign Media Coverage of the 3.14 Unrest 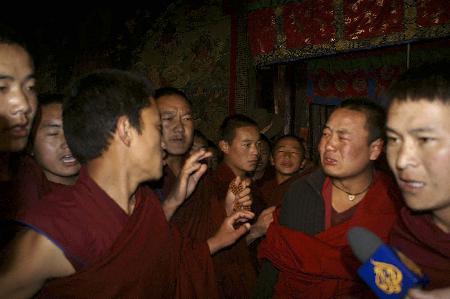 In the hours and days following the event, there were several cases of words and especially images misrepresenting what was going on in Tibet. While I don’t think it was necessarily due to a global anti-China conspiracy (a state-sponsored bogeyman if there ever was one) it certainly indicated sloppy journalism. On the face of it, as the first news of significant unrest emerged from Lhasa on May 14, it seemed like one of those stories that writes itself, which is a classic trap for any journalist: “Tibetan Monks! Chinese Troops! Film at 11!” Not that the Chinese coverage was any more nuanced (“Let’s blame it all on the Dalai Lama Clique!”), but at least CCTV and Xinhua wear their lack of objectivity on their sleeve.

…I’m a historian by training, and as I’ve written elsewhere, history is a slippery ally in contemporary political disputes and I’m frustrated by the extent to which the historical record has been twisted and warped by both Chinese state media and the free Tibet crowd. But the truth is that history education in the PRC is highly politicized, and the state uses it to shape public opinion and to preserve the legitimacy of the government and the Party. The netizen response is a reflection of this, and this response has also received (at the very least) tacit official support from the traditional state media. I see a parallel here to the anti-Japanese internet fervor of a few years back, which was also given a pretty free rein and tacit official support until it threatened to hurt Sino-Japanese relations and the government stepped in and shut it down.

I do not mean to defend CNN from criticism. Its coverage is far from perfect and is shaped by certain biases. Charges of bias are utterly common in regard to any US media outlet on virtually any story (Clinton says the media is biased in favor of Obama, and Obama says Clinton is favored, etc). But under conditions of relative freedom of the press, bias can be challenged, new information can be brought forward, and a more accurate record established. That is what is happening for those who follow the story in the US.

However, that does not and cannot happen in China. Stricter state control of the media makes it impossible to bring forth alternative viewpoints and survey a broader range of information and interpretations. There is close to nothing in the Chinese media (save a few brave bloggers and a group of largely-ignored intellectuals) to challenge the claim that the Dalai Lama was somehow behind the outburst of violence. Political control of the media makes it very difficult to explore the larger questions at hand: why did Tibetans riot on the 14th? What happened in the days before? We know that some monks were arrested on the 10th what was the nature of their apprehension and detention? And what are the larger economic and social dynamics that might lead young Tibetan men to violence? Yes, there was likely some external encouragement from Tibet independence groups (note: The Dalai Lama is not an independence advocate) and that is part of the story – a part we in the West can see and understand – but there is also an internal, Chinese aspect to the story – one that the CCP obstructs through its media control.

In the International Herald Tribune, Howard French compares the Chinese reaction to events in Tibet to the American reaction to the brouhaha over presidential candidate Barack Obama’s relationship with a controversial pastor, and examines the impact of free public dialogue about sensitive subjects:

Although Americans may often take it for granted, at their best they enjoy a largeness of spirit that permits them to air their dirty laundry in public, not to shy from controversy, and to be able to visit and revisit even the most painful aspects of their past and to explore them in the light of day.

I refer to the intellectually refreshing sensation they can receive in seeing conventional wisdom formed on any given topic and then just as surely challenged. Finally, I refer to the right to be wrong, and the right even to make a fool of oneself in public.

The sermons of the Reverend Jeremiah Wright Jr. and Obama’s response have involved all of these things, while the Chinese conversation about Tibet, carefully policed through censorship and through myriad other methods that China’s authoritarian government employs to enforce consensus has involved none of them.