A Rescue in China, Uncensored

Mothers wailing over the bodies of their children. Emergency workers scrambling across pancaked buildings. And a grim-faced political leader comforting the stricken and reassuring an anguished nation.

While such scenes are a staple of catastrophes in much of the world, the rescue effort playing nonstop on Chinese television is remarkable for a country that has a history of concealing the scope of natural calamities and then bungling its response.

Since an earthquake flattened a swath of rural Sichuan Province on Monday, killing more than 13,000 people, the government in Beijing has mounted an aggressive rescue effort, dispatching tens of thousands of troops and promptly sending Prime Minister Wen Jiabao to the disaster zone, accompanied by reporters. With a hard hat on his head and a bullhorn in hand, he ducked into the wreckage of a hospital where scores of people were buried and shouted: “Hang on a bit longer. The troops are rescuing you.” Throughout the day, the images of Mr. Wen directing disaster relief officials and comforting the injured dominated the airwaves.

See also “Vilification turns to sympathy for China after quake” from Reuters:

Unlike in previous disasters, China appears to have come clean on the scale of the Sichuan earthquake, admitting that the final death toll is likely to be in the tens of thousands.

Add to that the ubiquitous image of Premier Wen Jiabao comforting victims and spurring on rescuers, and the Chinese government can probably be confident of winning hearts and minds even though millions are right now feeling the pinch of inflation near a 12-year high.

For more on Chinese official media coverage of the quake and its aftermath, see Jonathan Ansfield’s “Seismic Shift: State TV on Speed.” 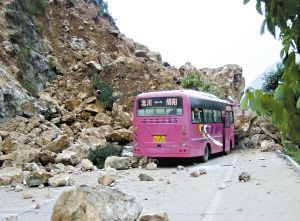