A prominent Chinese lawyer, known for his defense of political prisoners and those seeking to defend their rights against the state, says police grabbed him as he left his office and hustled him home to prevent him from marking the June 4, 1989 crackdown with a visit to Tiananmen Square.

Meanwhile, dissidents and relatives of those killed called for public events to remember the dead, amid a background of national mourning for the victims of the Sichuan earthquake on May 12.

“Late on June 2,” Beijing lawyer Pu Zhiqiang said, “a policeman by the name of Zhang Yang telephoned me and said he’d like to talk to me. I told him that there was nothing for us to talk about because we are not exactly friends 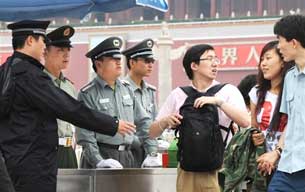 BEIJING: Chinese security forces check tourists’ bags as they enter Tiananmen Square, June 3, 2008. Just 66 days ahead of the Beijing Olympics, security is tight ahead of the 19th anniversary of the June 4, 1989 crackdown that left hundreds, possibly thousands, dead.

On the morning of June 3, a police officer with whom Pu said he was on good terms accompanied him to his office.