It’s bad news for a mainland newspaper to let something slip about the 1989 Tiananmen crackdown. Really bad news. The news only tends to get worse when the slip-up occurs at a time as delicate as now, with the Olympics days away and Beijing on tenterhooks about, among lots of other things, foreign TV broadcasts and tourists at Tiananmen Square. But one week after its well-publicized infraction, the propaganda-meisters remain eerily silent in the case of The Beijing News. Persons informed on the matter say it may very well stay that way until after the Games.

Last Thursday the paper, one of the country’s elite commercial dailies, ran an interview with Pulitzer Prize-decorated photographer Liu Heung Shing. Liu is the editor of a new coffee-table volume of photos that spans the tumultuous history of the People’s Republic (Newsweek’s Alexandra Seno profiled him last week). Much of the subject matter is politically tinged, including images of the Tiananmen demonstrations, the Cultural Revolution and previously unreleased shots by Chinese photojournalists. As a result the book is unlikely to be sold on the mainland, and some copies shipped in have been impounded by customs officials.

To accompany the interview in The Beijing News, Liu says, he e-emailed the paper three photos of his in the book, though he was cautious not to select any that would be too risky to publish. When the interview appeared, however, the spread of images featured a fourth he never sent, at the bottom corner of the page: 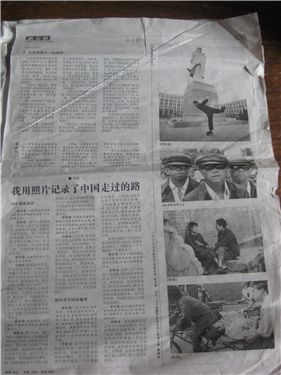 He Xiaoxin: How Far Can I Go? How Much Can I Do?

Hu Deping on Rule of Law and Political Reform