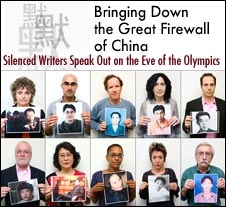 PEN holds pictures of journalists jailed in China during the Olympics, courtesy of PEN.org

In relation to a previous article on CDT, Chen Daojun (陈道军), the journalist/activist sentenced to three years in prison for three articles posted online, follows a growing trend of bloggers and other citizens being arrested for internet posts. Reporters Without Borders reports and calls for the release of Chen Daojun:

“Chen Daojun is guilty only of expressing his views on Chinese politics,” Reporters Without Borders said. “He is the second cyber-dissident to be convicted this year by a Chengdu court, following Huang Qi, who was arrested on 10 June because of his online articles criticising the management of humanitarian aid after the 12 May earthquake in Sichuan. By jailing Internet users in this fashion, the authorities have once again shown they are unable to handle criticism.”

“This is one of the most important cases in recent years,” Zhang Yu of the Independent Chinese PEN Centre told Reporters Without Borders. “No one has been given such a severe sentence for just a handful of articles since 2006, when Li Changqing got three years for writing about the 2004 dengue epidemic in Fuzhou [the capital of the southeastern province of Fujian].”

Zhang added that only one lawyer in the Chengdu region, Xiang Yang, was notified that the trial was going to take place. He was told on 17 November. The next day, the police summoned him and asked him to explain why he was defending Chen, whose own lawyer, Zhu Jiuhu, had not been told.

A Tibetan activist, Walza Norzin Wangmo, was also convicted… She got a five-year prison sentence for disseminating information about the current situation in Tibet by telephone and Internet.

The articles in Chinese can be found on the Reporters Without Borders website. Blogging for China has a sample of translation on one of Chen Daojun’s essays in reaction to the Lhasa riots and subsequent Chinese nationalism in March:

The second essay brought up in court follows up on the strong backlash from Chinese people inside China and around the world against the disgraceful coverage of the March incident across much of the western media. The title is “反西方华人的背景” (Backgrounds of the Anti-West Chinese) and it includes sweeping charges against all Chinese who do not think like him
[On anti-west Chinese in China]: Years of brain washing by the CCP seriously destroyed the spirit and soul of the Chinese. It produced generations of ignorant and stupid populace that knows nothing about right and wrong, self esteem, human rights, and value of life. These ignorant and stupid people are the most mind-numb, selfish, cowardly, principle-less and calculating kind. … They desperately need something to show their poor value and whatever little that is left of their courage. They do not dare to take on the dictatorship because their cowardliness and selfishness, but found a chance when the west is boycotting Olympics and protesting crackdowns in Tibet. …

[On anti-west Chinese living overseas]: They are a group to be suspected. If they love China and CCP, why do they go through all the trouble to move overseas? Besides those who immigrated before CCP took over the power, all overseas Chinese fall under the following types: 1) a very rare few who were seeking freedom. 2) organized political immigrants by CCP that are tasked to spy and stir up trouble. 3) relatives of the Chinese officials who took all the blood money stolen from the people to safe guard their fortune in a free west. … Another fraction of them consists all those Chinese students attending school overseas. In today’s China, where are they from? They are either children of corrupt officials or cheating businessmen. …