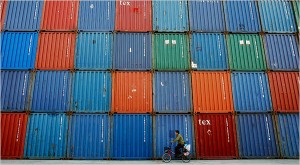 The global economic downturn has had a greater effect on China’s economy than previously forecasted. November’s exports fell by 2.2% from the same time one year ago. The New York Times reports:

Many analysts had anticipated that the monthly trade figures would show China’s export machine slowing along with the global economy, but few had expected it to slip into reverse. In October, exports surged 19.2 percent year-over-year.

“We were expecting a slowdown, but the magnitude is a bit shocking,” said Wang Tao, an analyst at UBS Securities.

Most worrisome, China’s economic dynamism of the last 20 years has been powered by the twin engines of exports and foreign investment. But in other sobering news, the government said that direct foreign investment fell 36.5 percent from a year earlier in November.

In recent months, evaporating export demand had already forced thousands of factories to close in the Pearl River Delta of Southern China. Tens of thousands of jobs have disappeared, leading to protests by unemployed workers demanding back pay.

The current financial crisis has greatly strayed from China’s economic model and will force China to rethink its future economic policy and the need for economic reform.