Liaocheng’s mayor and vice mayor came next. The spreadsheet clearly shows that the “Public Relations Maintenance Plan” covers the Licheng city government, the construction bureau, the bureau of public utilities, the local natural gas association and the media. The post did not display the entire spreadsheet, but the author inserted a link for netizens to download the spreadsheet in full. The author’s own calculation put the number of people covered by the plan at 212 and the money allocated at 1.06 million yuan.

This reporter yesterday called the Shandong Liaocheng XinAo Gas Company Ltd., XinAo Gas Group and the Liaocheng government to verify the authenticity of the spreadsheet, but they all declined to comment.

In the following post, a netizen call Shifeike wrote:

To be fair, the annual public relations maintenance cost of 1,063,300 yuan to help the company’s survival is nothing out of the ordinary in the Chinese context. It’s like the summer tributes, winter tributes and tax surcharges a century ago under the Qing Dynasty – a institutionalized must.

I have no intention to judge the company morally. All the information is from the Internet. My thanks go to the Internet, for revealing a telling morsel of truth of this prosperous and glorious era……Once again history has convincingly proven the fact that any company or individual can achieve absolutely nothing without the Party and the government.

Shifeike also did some background search about the XinAo Gas Company in the same post:

XinAo Gas Company is a Hong Kong-listed clean energy distributor (2688.HK). It sells piped cooking gas for urban areas, Liquefied Petroleum Gas, Vehicle Gas (CNG and LPG) and Dimethyl Ether. It also distributes energy products that are not shipped through pipelines and provides other value-added services based on energy distribution. In the regard of urban gas pipelines, XinAo has successfully installed gas facilities in more than 70 Chinese cities as of April 2008. The cities are located in 14 provinces, autonomous regions and municipalities and cover a total population of 41 million.

While the original spreadsheet was removed soon after the news broke, netizens have created screenshots, text files and downloads of the “budget form,” and it continues to inspire heated commentary on the Chinese Internet. 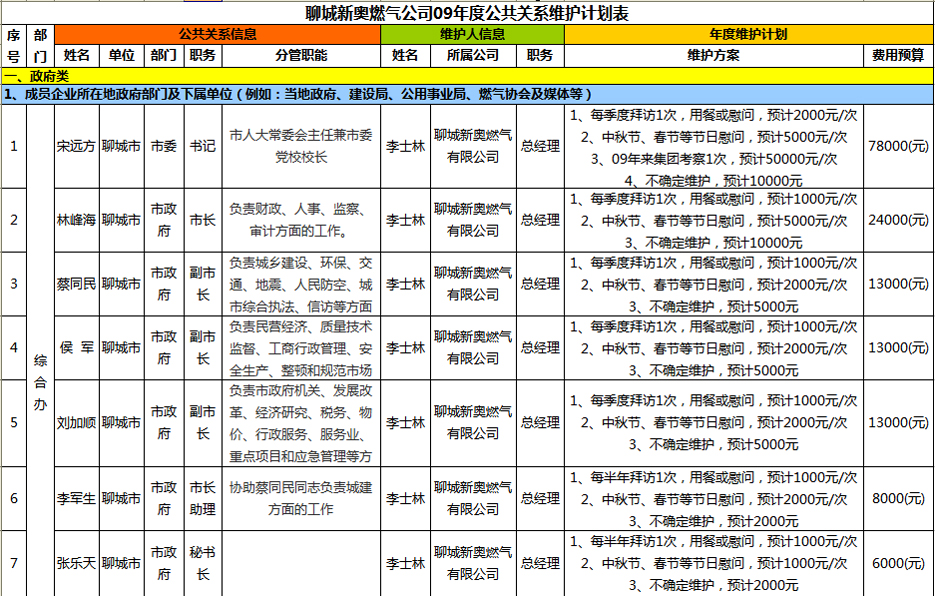 You can see text version of the spreadsheet at here and here. 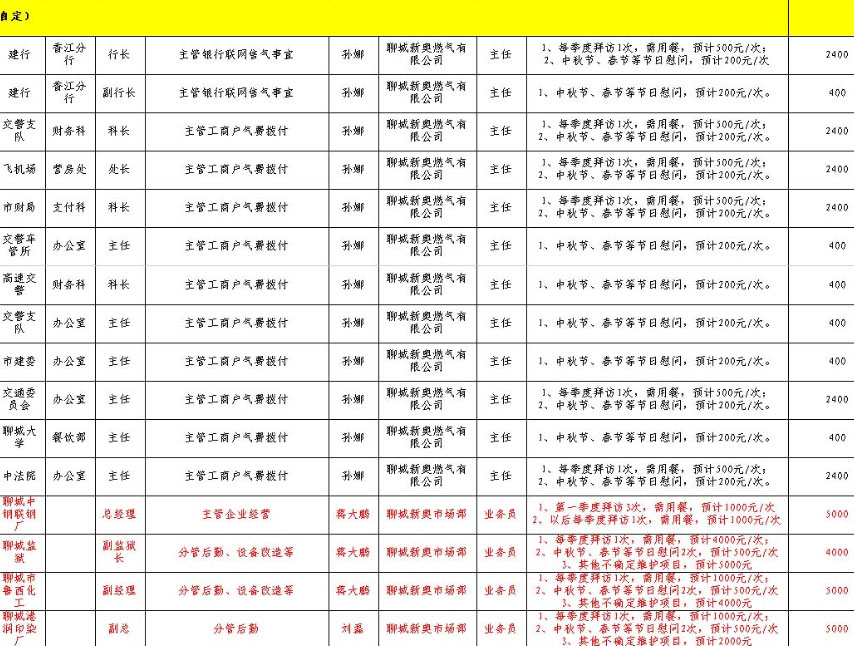 UPDATE: More than twenty-four hours after the spreadsheet showed up online, the XinAo company broke their initial silence and issued a brief statement. From the People’s Daily website:

The event of “2009 Public Relations Maintenance Budget Form” going online on Jan. 7, 2009 is a false event. Liaocheng XinAo Gas Company has never made such a plan. We have reported this to the Liaocheng Public Security Bureau.

On the negative influence of this event, we reserve the right to investigate.

Thanks to people who have been caring about and supporting the Liaocheng XinAo Gas Company. 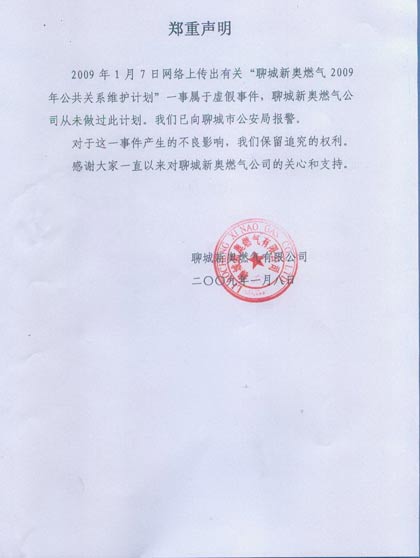