Some Chinese netizens reacted to the recent sale by fine arts auction Christie’s of two looted Chinese sculptures by coming up with an online video game. From The Wall Street Journal’s China Journal blog:

The foiled auction of two looted bronze animal heads has been a popular topic on China’s Internet in recent days, with many declaring auction house Christie’s public enemy No. 1. Hundreds of thousands of remarks criticizing the company were left by Chinese web users on various online forums and bulletin boards. A few decided to make a small computer game: Hit the Christie’s.

Through clicking the mouse once, a Web user can “hit” a punching bag with Christie’s name in Chinese written on it, a bag that appears to dangle from the Eiffel Tower. The poor company has been hit over 340,000 times, thought the high count could be credited to the fact that players can hit the bag only once before having to re-register.

China’s online community has often been quick to make videogames out of national or world events. For instance, the “Hidden Cat” game came out right after the mysterious death of a young man in detention house last month — a death prison officials blamed on the children’s game known elsewhere as “hide and seek.”

Here’s a screen grab from the game’s web page. 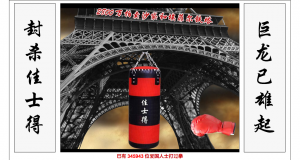