At the annual Boao Forum held on Hainan island, during a discussion on censorship, movies and society, Jackie Chan stated “we Chinese need to be controlled“: 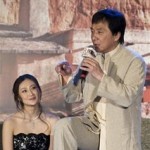 “I’m not sure if it’s good to have freedom or not,” Chan said. “I’m really confused now. If you’re too free, you’re like the way Hong Kong is now. It’s very chaotic. Taiwan is also chaotic.”

Chan added: “I’m gradually beginning to feel that we Chinese need to be controlled. If we’re not being controlled, we’ll just do what we want.”…

The action hero complained that Chinese goods still have too many quality problems. He became emotional when discussing contaminated milk powder that sickened tens of thousands of Chinese babies in the past year.

His comments have caused a backlash in Taiwan and Hong Kong:

Chan’s comments drew applause from a predominantly Chinese audience of business leaders, but did not sit well with lawmakers in Taiwan and Hong Kong.

Another lawmaker, Albert Ho, called the comments “racist,” adding: “People around the world are running their own countries. Why can’t Chinese do the same?”…Chan’s comments were reported by news outlets in Hong Kong and Taiwan, but were ignored by the mainland Chinese press.