David Bandurski: Is CCTV’s Network News in For Another “Face Change”?

After the death of CCTV anchor Luo Jing (罗京) last week, there has been talk about change within the programming of official news media. However, David Bandurski from the China Media Project is not so much convinced this is an attempt at real change, but questions if this revival is another cosmetic front for the propaganda department: 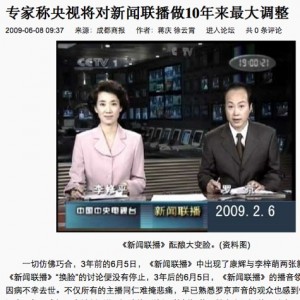 It was exactly three years ago that I rattled off my views on another Network News “face change,” providing the kicker for this piece by the Wall Street Journal.

Changes back in 2006 were supposed to infuse the news program with new vitality and soul. Whether or not this was achieved is purely a matter of personal taste. Do you find Kang Hui (康辉) and Li Ziming (李梓萌) endearing as they read off the news stories of the day, shaped and signed off on by top CCP leaders, and delivered going right down the chain of command, starting with President Hu Jintao?

Though they may come with a heap of media hoopla, “changes” like those at CCTV’s Network News are generally not important in and of themselves.

But they are interesting illustrations of the underlying factors both promoting and inhibiting media “change” in China. They are classic examples of the commercially-driven changes mandated by Hu Jintao’s policy of the “Three Closenesses.” At the same time, however, they are stunted and held back by the overarching priority of media control — which goes a long way to explaining why, ultimately, these “changes” are so ineffectual.