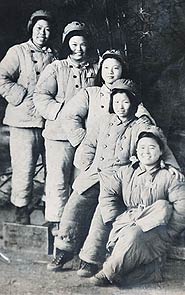 From the Times Online:

The film’s title, 8,000 Girls Ascend the Heavenly Mountain, suggests that Chinese audiences will see a tale of joy when it is aired on television this autumn.

It dramatises the lives of thousands of girls aged 13 to 19 who went to China’s remote far west in the 1950s to follow soldiers sent to colonise the turbulent Muslim region.

In real life it was a trip to purgatory. As shooting for the film unfolds in Beijing under the watchful gaze of party censors, an astonishing story of mass deception, forced marriages and suicides has come to light.

Elderly women have come forward to tell how they were lured to China’s new frontier by false promises of training and education – only to find themselves locked in barracks and coerced into marrying soldiers.