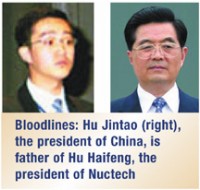 Namibian prosecutors investigating allegations of kickbacks on government contracts with China have expanded their inquiry to include a Chinese contract to build a key railroad link, investigators said Friday, indicating that they suspect a pattern of corruption on deals with China.

Earlier allegationsof bribery involving a contract to supply Namibia with scanners at security checkpoints raised alarms in both Namibia and China because the company that makes the scanners, Beijing-based Nuctech Company Limited, was headed until late last year by the son of Hu Jintao, China’s president. Although there is no suggestion that President Hu’s son, Hu Haifeng, knew of the Namibian dealings, Chinese government censors have blocked China’s Internet users from reading or searching for any reference to the case.

Investigators have said they want to question Mr. Hu as a witness, not a suspect, in the case. Hu Haifeng was Nuctech’s president when the $55.3 million contract to supply the scanners was signed in May 2008, according to the company. He had been promoted to the position of Communist Party secretary of Tsinghua Holdings, which runs Nuctech and about 30 other businesses, by early this year, when Nuctech is accused of having paid $4.2 million in kickbacks to a Namibian front company.

Also from the Christian Science Monitor:

Princelings have flourished in China’s capitalist economy and have been tapped to run large companies, including state-owned behemoths. Researchers have estimated that as many as 90 percent of companies in key sectors are in their hands.But that may overstate their reach, particularly as the economy matures and more private companies form, say analysts.

Princelings aren’t unique to China. In most political systems, the offspring of senior leaders walk a gilded path. Still, the perception that a privileged few receive all the economic spoils remains potent in China. In 1989, it was a rallying cry for protesters in Tiananmen Square.

The very whiff of a scandal that might brush the president’s son has been a red flag to China’s ever-vigilant censors.

Two leading news websites, Sina.com and 163.com, which carried stories on the Nuctech case on their technology channels, without naming Hu, were blocked – an unusually strong reaction from authorities, says Xiao Qiang, a professor of journalism at the University of California-Berkeley and editor of China Digital Times. Internet searches on keywords like “Namibia bribery” are now denied, a common tactic in China.

The severity of the censorship underlines the strict taboos in play, says Mr. Qiang. “This is more than princelings. This is the current’s president’s son. It can’t be more sensitive than that,” he says.