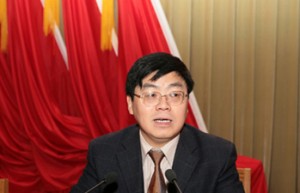 Soon after the training finished, one of the participants released her notes from this session online. CDT has translated the entire collection of notes from this 2009 SCIO Internet News Work training session; in total there are eight articles, which we will publish consecutively in coming days. CDT would like to thank the translator, who wishes to remain anonymous. Read the previous installments of notes. What follows is the fourth installment:

Song Fufan (宋福范), Director of the Ideology and Political Education Teaching and Research Section of the Marxist Theory Research Department at the Central Party School of the Communist Party of China

A. There was one message from the Fourth session of the 14th Congress. The message was to research the issue of building the Party. [Song Fufan] answered questions such as why one must strengthen and improve the party under new circumstances, how to strengthen and improve the party under new circumstances, and building the party under new circumstances.
B. Only the fourth sessions of the 14th and 16th Congresses researched the issue of building the Party.
C. The state of the world
Long term: the world is becoming more multi-polar, the economy is becoming more globalized, high technology is developing quickly, competition between countries is becoming more and more fierce on all levels.
Short term: the influence and impact of the international credit crisis
D. The state of the country
Long term: there are more and more problems that have arisen since the country began developing.
Short term: China’s influence on the international community has grown, [China] has also increasingly come under attack
E. The state of the Party
There have appeared within the Party new circumstances and duties to which it is not well suited and which are not in accord with the nature and purpose of the Party.
F. Means of resolution: persist in reform and innovation, increase the Party’s vigor, persist in the Party’s [sole] governance of the Party, strictly govern the Party.