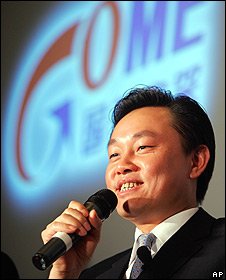 He was arrested on suspicion of share manipulation in November 2008, a month after he had been labelled China’s richest man.

He was placed under investigation and two months later, resigned as the director and chairman of the chain of 1,200 electronics stores he had built up from nothing… Two senior police officials have been accused of bribery in connection with the case.

The trial will be watched closely by the business community in Beijing. It will be the highest profile case yet involving a private entrepreneur in China.

Opinion polls in the state controlled media suggest many Chinese are suspicious of those who have made a great deal of money during China’s economic reforms, believing them to be corrupt.

See also this past CDT post on Huang Guangyu.