A tornado, hailstorms, and rain storms have killed at least 29 people in Chongqing: 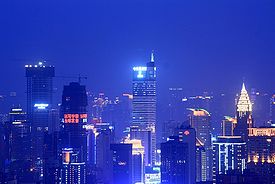 The storms, accompanied by gale-force winds, hit two rural counties in the giant municipality at around 2:00 am (1800 GMT Wednesday), leaving more than 190 people injured and at least one missing, state press and officials said… The death and injury tolls from the storms rose throughout Thursday, as officials worked to tally the total number of dead and injured, as well as the number of homes damaged.

“Tornados never happened here in the past — this is the first time,” Liu Fang, a local township official in Liangping county, one of the hardest-hit areas, said over phone… According to the People’s Daily, the ruling Communist Party’s mouthpiece, as many as 1,000 homes in six towns had at least partially collapsed in the storm, while thousands of others were damaged.