China’s Other Billion: Dispatches from a Rural Road Trip

This marks the first installment in a new series of posts by journalist Rachel Beitarie, who will be sharing with us dispatches from her journey across rural China. In this post, Rachel visits Beichuan, Sichuan and talks with survivors of the devastating 2008 earthquake.

Chapter One: Master Plan: Survivors of the Beichuan Earthquake Get New Homes – or Not (Part 1)

In his village of Yuchuanshan (玉川山), Mr. Du is leisurely sipping tea on the porch of his new house, watching his grandchildren play among fruit trees. 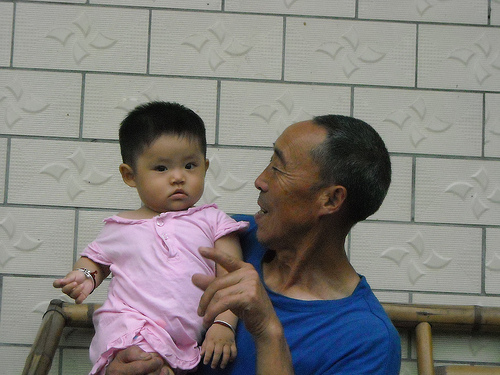 Mr. Du and his granddaughter, enjoying their new home after months in a tent.

The scene hasn’t always been that ideal: The family of seven has only recently moved into this spacious new home after living in a tent in their own front yard for more than a year following the collapse of their old home in the 2008 earthquake. But all is well now, Du declares. The compensation he got for his lost home, about 16,000 RMB, wasn’t really enough, considering that expenses and the cost of living are going up quickly in the recovered area. Still, getting to spend the evening of his life in peace and serenity on his own land is something one like Mr. Du surely appreciates. He is full of praise for his neighbors, his sons and especially the volunteers from around China and the world who came to help Beichuan in its dire times. All is well now.

Some 25 kilometers away, however, all is not well. The town of Leigu (擂鼓镇), only about 8 kilometers from Beichuan city, was one of the hardest hit, the whole town virtually flattened, and survivors from the population of 18,000 (including the population of some 30 attached villages), are all left homeless. Where the town once stood there is now a refugee camp: rows upon rows of “disaster relief houses.” The thin walled structures have served the people well, but they are meant to be temporary and two years of use are apparent. The houses are rundown but in Leigu, most are still occupied, with thousands still waiting for a more permanent solution. All around, construction of farm houses, apartment buildings and public facilities such as schools and hospitals is in motion.

Wei Yonghong, a farmer from near Leigu is one of those in waiting. Her 10-month-old daughter, like many other children, was born in a makeshift hospital in the camp. Her older son started his schooling in a UNICEF supported school there last year. When disaster fell, Wei was out, working her fields. Her in-laws managed to get the boy out of a collapsing house, but she took almost 24 hours to find that out, all the while trying to make her way home among shattered buildings and rubble. She now prepares for what could be a third winter in the camp if she’s not relocated soon. The family still hasn’t been notified when they will get a new house. “We want to go back to the village to rebuild our house ourselves, but the government said no, there is a master-plan so we have to wait for them to approve construction. We still don’t know when that will be. We’ve been waiting a long time without anyone telling us anything. Will you write about it”? 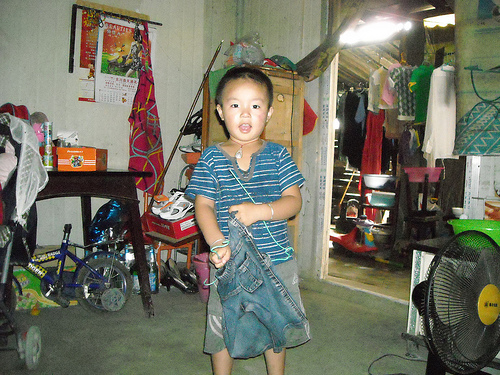 The son of Wei Yonghong inside their temporary house in Leigu, Beichuan.

With many complaints of belated compensation and being ignored by authorities, Wei still counts herself among the lucky ones: Homeless, jobless, facing an uncertain future and forever haunted by distressful memories, she nevertheless has her family still whole and mostly unharmed. Her neighbors from both sides, as well as her cousin, all lost children in the earthquake.

At another row of shabby temporary houses, Jiang Qinyong tells a similar story: Her village, too, is not yet approved for reconstruction (it was located at the site of the camp itself). Watching over her daughter and several other children, Jiang, whose husband was badly injured and spent months in a hospital in Chengdu, is in a good mood, like her neighbors, who all try to keep themselves busy in the routine of transitory existence. Old women busy themselves keeping tiny plots of arable land, thus helping to feed their families. “Before, we used to grow much of our food ourselves, but now we need to buy everything in the market, and prices are rising all the time,” Jiang complains. She says the hardest aspect of camp life is personal hygiene. Showers and toilets are provided, but are crowded in the evening and uncomfortable for families with small kids.

It is hardest, maybe, for the old and the disabled, of which Li Yinjin is one. The blind woman, aged 70, was alone in her home when the earthquake hit. Feeling her way out she was then found and brought to safety by a neighbor. She too is still waiting to receive compensation and a relocation plan, living in the meantime in a 14 square meter room together with her son and two orphaned grandsons. The son’s wife died in Beichuan town, he himself having returned home from Jiangsu province, where he was working in construction. Like many of the men and some of the women, he now tries to get employed within the region: Opportunities seem abundant with so much construction going on, but somehow many still complain they have a hard time finding a steady job or sufficient income.

The clearest distinction seems to be between those still waiting, like Jiang, Wei and Li, and those like Du who already have a home, or even those with only a clear relocation schedule. The latter, feeling the worst is now behind them, are in high spirits, making many plans and frequenting the many furniture shops that have sprung up at the edge of the camp. Warm invitations are repeatedly being extended: “Come visit again this winter. By then, we could drink tea in our new home.” By then, Wei Yonghong’s baby girl will be taking her first steps, most likely on a grassy path between trailer-houses.

All photos are by Rachel: 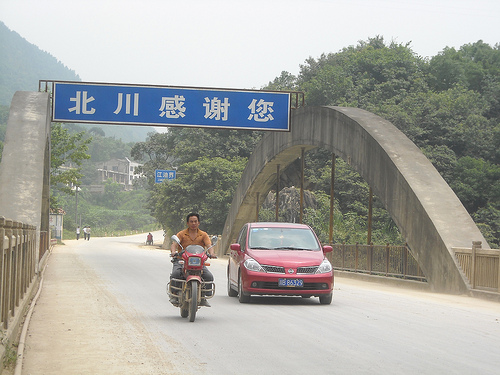 A sign at the border of Beichuan country. Beichuan does thank, repeatedly and with loud praise, all those who came to the county’s aid. 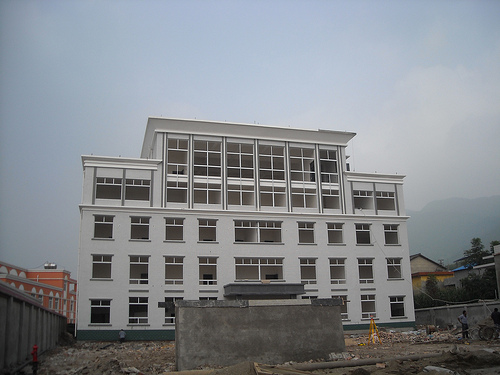 New government building in Tongku Town. Always the most flashy. This is China, for better or worse 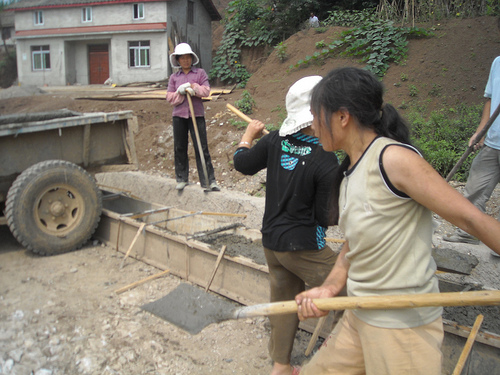