China’s Other Billion: The Teacher from Guangxi

Following is the latest installment in a series of posts by journalist Rachel Beitarie*, who will be sharing with us dispatches from her journey across rural China. In this post, Rachel visits the remote mountain village Yangmai in Guangxi, where she hears a tragic tale of a villager who dared to acknowledge he was gay. (Read previous installments of the travelogue here.)

The teacher from Guangxi

Teacher Ren lies down on the sofa in his home at Yangmai village. He sits up then lies down again, unable to find a comfortable position. “This is how it is when a person is old. All pain and never any rest.” He tries to smile, a trial that ends with an agonized fit of coughing. Teacher Ren is in his seventies. He retired from the local elementary school ten years ago. His wife, Wang Shuyin, says he’s been like that for three years. “He was in the hospital for almost a year, but now he’s just resting at home, taking medicine.” She goes on to explain the peculiarities of the local health system. She is classified a farmer which grants her subsidized health-care. “I paid only 40% of the hospital bill when I had an operation to remove a tumor. But he is a teacher. For him, we have to pay 80 percent of the total.”

Their village is a tiny one, only ten houses hidden in the mountains off the main road, some ten kilometers away from the town of Lingyun (凌云 a town in Baise prefecture in West Guangxi). There is no sign pointing to the village, and Wang explains the rough dirt road that leads to it was built by the villagers themselves. 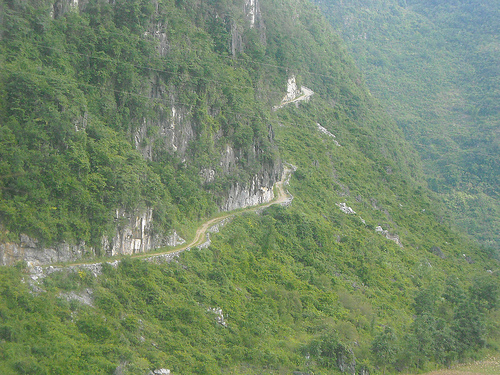 “No help from the state. The house too, we built it ourselves. The state doesn’t build houses for us, not like in other places.” Their house is the biggest of the ten, a two-story building with a porch extended into their fields. They live alone in the house they built after Ren’s retirement. Their three sons all left for Guangdong province, where they work and study.

Ren started working as a teacher in a nearby village in 1963, the first of his village to have finished high school. “We needed to walk everywhere back then, there were no roads. As a teacher, I would get 30 Yuan a month and five more for food.” The Cultural Revolution came here in 1968 he says, but then quickly changes the subject, chatting away about religions and traditions. There is a bible near his bed but he is not a Christian. “I just bought it out of curiosity.”

Very few religious signs are evident around this area: no temples or churches anywhere but the tradition of ancestor worship reigns supreme. The hall of every house is decorated with ancestors’ photos (Sometimes joined by a photo of Chairman Mao) and red inscriptions. 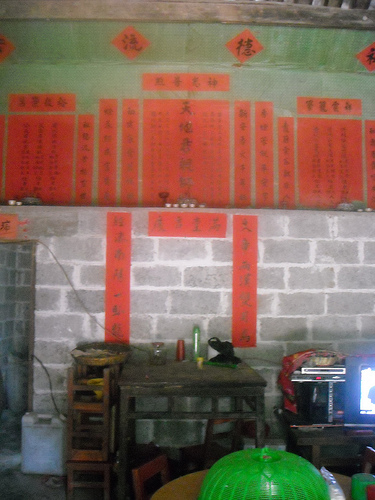 In towns and villages, many shops sell funeral decorations unique to the area: fluttered paper mobiles of many colors for Han funerals, paper shoes to be buried with the dead for the funerals of the Zhuang ethnic minority. The shoes are made out of China Mobile advertisement leaflets, hand-painted by the shop owners.

On hillsides, many graves show new and elaborate tombstones. A villager explains this is one of the first things a family would spend money on when they start doing well, as appeasing the spirits brings good luck and more money.

Ren picks up the conversation again with an effort. There is something on his mind but he seems hesitant to blurt it out, and then asks it all the same.

“You come from Beijing, such a big city. Is it true that same sex marriages are now allowed there”?

It is now my turn to hesitate. The question caught me by surprise and I try to read in his face whether he is scandalized by the idea, or encouraged, or maybe just curious. Wang is quick to intervene, throwing light on where the question came from.

“There was one here, you know. Teacher Lou. He wanted to live with a man. Later we heard in big cities it’s quite normal, but not here. Here, he was cursed to death.”

“Teacher Lou joined the school when I was still working. Such a bright young man and a very devoted teacher. He would come to visit me often after I retired,” Teacher Ren says about his friend.

Wang adds that some time ago, Teacher Ren wanted to leave his wife, who was also from the village, to live with a former student. “The family, the school, other villagers, they would criticize him every day, saying he full of shame. Then, I didn’t see it myself, two other neighbors found him in the field, dead after he swallowed rat poison.”

他被人骂死了 – Cursed to death. Somehow, I assumed she had just used that as a figure of speech. Turned out she meant it quite literally.