China’s Other Billion: Life Under the First “Naked Government”

Following is the latest installment in a series of posts by journalist Rachel Beitarie*, who will be sharing with us dispatches from her journey across rural China. In this post, Rachel visits Baimiao, Sichuan, where the government launched a groundbreaking policy of opening all its expenditures to public scrutiny. (Read previous installments of the travelogue here.)

The Government Has No Clothes – The Curious Case of Baimiao

“My dear boy, it is a contradiction in terms: You can be open or you can have government” (civil servant Bernard on the “open government” initiative, from TV series “Yes minister”)

The Township of Baimiao, in the northeast of Sichuan, rose to national fame earlier this year following a decision by its party secretary to exercise a “naked budget,” ie expose all government expenditures to the public eye. Media outlets from Beijing to Guangzhou wrote about that exercise, dubbing Baimiao “China’s first naked government”. Commentators called on other local governments to follow suit, and the official website for Baimiao was brought down after some 300,000 netizens logged in, praising, supporting or in many cases, expressing skepticism or demanding answers to many questions, all of which were patiently answered by the secretary, Zhang Yingshang. 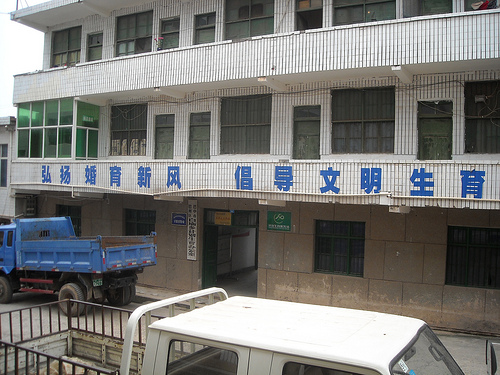 But where exactly is Baimiao? What does life there look like? What are the challenges the naked local government face and how does it deal with them? Has the initiative changed things? Even more to the point: What do the people of Baimiao think of their own government? I was curious enough to go take a look, but have to admit here and now, I failed to resolve most of those questions, even after visiting the place.

At first (and second… and even third) glance, Baimiao Township seems a most unlikely place from which to launch a government reform. Up in the mountains of northeastern Sichuan, it is a tiny municipality consisting of some ten small villages, about 40 kilometers from Bazhou, the capital of Bazhong prefecture. There is only a dirt road leading to Baimiao and the ride takes almost two hours. Few outsiders ever get here, and most are involved with some small oil exploration site that operates further up the road. Oil might some day bring wealth to Baimiao but for now it brings mainly mud and dust and noise from many passing trucks. It is not perhaps so surprising that the “naked budget” that caused such a stir elsewhere has barely registered with those who were supposed to be the beneficiaries, as well as the supervisors on government spending – the 10,000 who actually live in Baimiao.

Ironically, the people of Baimiao proved to be some of the least open and hardest to communicate with I’ve met anywhere in China.. Almost all the residents of Baimiao are farmers, growing rice and rape. Some supplement that by producing rape oil in their back yards. Many don’t speak Putonghua and more were reluctant to speak to me at all. 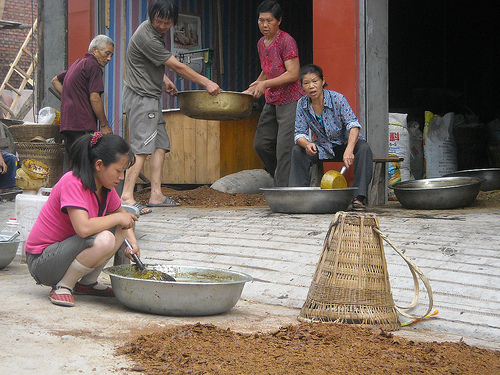 Poverty is evident and acute: Narrow dirt roads between villages, sewage flowing through the one street of Baimiao township (the seat of the local government but really just a village, though slightly bigger than the others). Electricity is provided but not all households have running water. Evident also in many people’s appearance is the total lack of work safety regulations in these parts, combined with appalling medical services and the benefits of modern medicine (plastic surgery, prosthesis) being way out of reach for most. Even a short wander through the single street reveals a remarkable variety of disabilities and defects: many limps, few missing limbs and one horribly deformed face on a burn victim. “People are very poor here,” says Ms. Yang, a farmer. “Anyone who can just leaves to find a job elsewhere. Most young people already left.” When asked if she thinks things will improve in the future she answers matter-of-factly: “I don’t see how.” There is some new construction in Baimiao, four or six stories buildings that replaced the traditional houses and, Yang says, is supposed to attract some of those who left to buy property back in the village. Some of the construction, she said, has been stalled for months. A team of road engineers was around, taking measurements. Repairs and paving of the road are supposed to start this autumn, they said.

It’s hard to elicit a response from people regarding their government’s initiative. Some haven’t even heard about it. Those who have basically find it quite hilarious that their township is now famous all over China. The budget, including officials’ salaries and benefits, welfare expenditure, and spending on cigarettes, was published on the official website. In Baimiao, however, there is no Internet bar and only a handful of people have an Internet connection. (I actually saw only one, at a small grocery shop, where the shop-keeper said a few more people had Internet connections in their homes). Even those who know about the “naked government” and might have occasional Internet access, never bothered to actually check the budget. Mr. Yu, who drives a minivan between Baimiao and Bazhou city (there is no regular bus), says he never got around to looking at the budget. He knows it caused a swirl throughout China but doesn’t know what exactly was there and doesn’t care. The mention of secretary Zhang’s name elicits only laughs but no response, supportive or otherwise (secretary Zhang himself was not in town at the time of my visit and the small government office seemed deserted). Many articles about Baimiao noted the fact that 65% of the budget was spent on food and drinks at banquettes for government officials. I suspect Baimiao’s residents already knew as much. The concept of a government “of the people, by the people, for the people” is obviously quite foreign here – almost as foreign as a foreigner coming all this way to ask irksome questions. When you have exposed sewage, not to mention exposed wounds, an exposed government seems, perhaps, a bit inconsequential, and not all that useful.

Read more about Baimiao via CDT.