Thousands Riot in South China over Land Grab (with Video)

Riots broke out in Guangdong when thousands of people attacked government buildings in protest over the sale of their land to developers, Reuters reports:

Witnesses in Lufeng city said the protests, in which around a dozen residents were hurt, were triggered by the seizure of hectares of land and their sale to property developer Country Garden for 1 billion yuan ($156.6 million), Hong Kong’s South China Morning Post reported.

Directing their ire at the local seat of government and attacking buildings including the local Communist Party headquarters and a police station, the angry mob in some cases used “sticks, bricks and their fists,” the Post reported.

Roads were also blocked, and a businessman said several thousand villagers had joined demonstrations outside government headquarters since Wednesday.

Earlier this year, in the Guangdong factory town of Zengcheng, thousands of migrant workers went on the rampage over the alleged maltreatment of a female worker, torching government offices, smashing police cars and marching in the thousands through the streets.

This video apparently showing the area after the riots is available on YouTube:

Photos have been posted by 黎畅 on Google+ (h/t @kinablog). 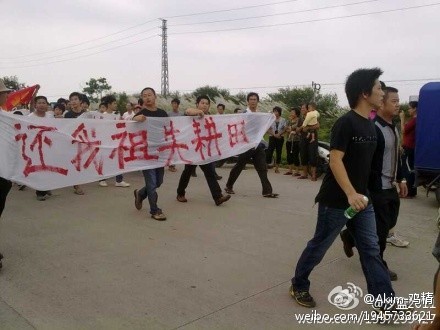 For more on this topic see “China’s Land Grabs: A Case Study” by Al Jazeera via CDT.