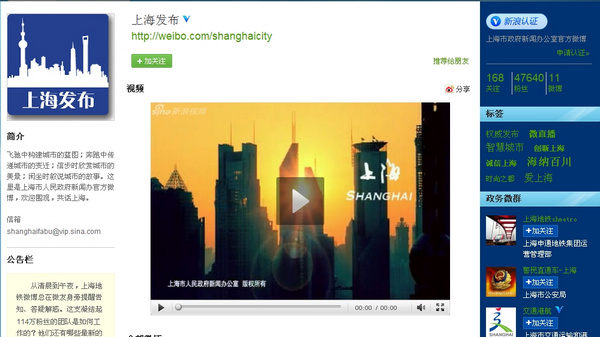 The microblog, officially verified as originating from the Information Office of Shanghai Municipal Government (IOSMG), has accumulated more than 30,000 followers in the five hours since its launch.

According to IOSMG, the content of the postings will be mainly about new policies and regulations, practical information related to activities in Shanghai, and interactions with Internet users over issues of public concern.

Vegetable prices, the selection of affordable housing, and upcoming cultural activities in Shanghai are included in the first several postings.

The “Shanghai City” platform includes links to several official microblogs from the city’s various authorities, including the Public Security Bureau, Transportation Bureau and Environmental Protection Bureau. Shanghai joins a growing list of government agencies and officials now using microblogs, and is the second to do so at the municipal government level following the unveiling of a Weibo news platform last week dedicated to a score of municipal agencies in Beijing. From the Global Times:

Wang Chen, the director of the State Internet Information Office, said more official entities and leaders are encouraged to soothe public concerns by soliciting public opinions, needs and resolutions, offering appropriate answers to heated topics and maintaining the legal rights of the public via the microblogs.

Despite of the positive actions from officials in utilizing new media outlets to enhance their administrations, experts have said there still remains a string of problems which need to be addressed.

“What to post, when to post, and how to reply to a post on the public microblogs poses a great challenge to the capabilities of the official microbloggers who represent their offices in the eyes of the public,” said Wang Sixin, the Media Law professor at CUC.

For example, how to choose the right words to quell public doubt via the microblog when an unexpected incident happens is all the more important, added Wang.

A report conducted by Shanghai Jiaotong University earlier this month revealed that 75 of the top 100 microblogging government departments in China are public security bureaus, leading the Global Times to proclaim that “The Cops are Going Virtual”:

The first PSB Weibo account was opened in February 2010 by the Zhaoqing police of Guangdong Province. The bureaus in the city of Ji’nan and Hebei Province followed.

“We are always looking for ways to promote relations between the public and the police. We also invite people to our offices. None have worked as well as our Weibo account,” Xu Chunhua, vice director of Ji’nan Public Security Bureau told the Global Times.

Weibo also provides for two-way communication with the public. “We created an open platform and anyone who wants to chat can write to us on Weibo.”

“The public is curious about what we do and how we work and Weibo lets them get involved,” said Xu.

See also recent CDT coverage of microblogging in China, including a visit by TechCrunch to Sina Weibo’s headquarters, and new measures passed to oversee microblogs and limit online rumor-mongering.