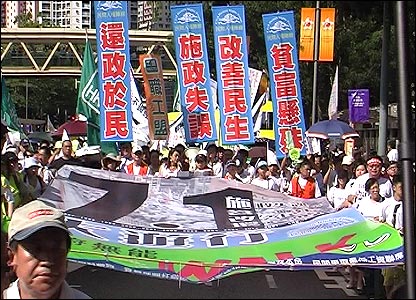 Not a trace of the July 1 Hong Kong protests can be seen on mainland Chinese media, and “sensitive words” surrounding the rallies have been scrubbed from major Web platforms. So Global Times Chief Editor Hu Xijin’s Weibo post addressing, in English, “protest” in “ongKong” got the surround-and-watch treatment:

HuXijin: Today’s “protest” in “ongKong” is quite normal. Under the policy of “one country two systems,” Hong Kong administers its own affairs. Beijing has no right to get involved, and probably has no desire, either. I don’t think this is an “anti-China ‘protest.’” The slogans are all about real estate tycoons, police abusing their powers, universal pensions, reforming the tax codes and granting workers 5 days more of vacation. 500 Indonesian maids also joined in to ask for a minimum wage of 4000 Hong Kong dollars. Beijing can voice its wishes, but solving these issues is not within the power of the CCP Central Committee.

Protesters did have a range of grievances, but Hu left out the more outstanding among them. He tried to explain himself after the Weibo firestorm was well under way, but his response only dug him deeper:

HuXijin: I’m a realist. Today I posted a Weibo that strung together Chinese and English. Still, it’s better than before Weibo. I believe the day will come when there aren’t so many keywords as now. At that time I won’t mix Chinese and English again. I’m older than a lot of people, I’ve seen China’s process of change, and I’m happy for it. I don’t think good things are ready-made. That’s why I’ll work hard to promote China’s change. Many others are doing the same.

“Keywords” are of course those “sensitive words” which the censors block and which netizens allude to in various forms, from puns to pinyin to, yes, English.

In all, Hu’s two posts received 2121 comments and 1935 reposts. Below are a selection of translated comments. Read more from CDT Chinese.

2:30p.m.: 1. Using the word “probably” shows that you haven’t received editorial training. 2. This is indeed not anti-China, it’s anti-Party. 3. The CCP’s official powers are to solve problems and serve the people, not voice its wishes. 4. This isn’t a “protest,” it’s a “demonstration.”

LittleParty: Where’s “ongKong”? What’s a “protest”? Do you have the guts to speak Chinese?

BurningYanXiaokang: Everything on TV yesterday was “get China out of Hong Kong,” “end the one-party dictatorship,” “redress **.” [“Redress” is usually followed by “64,” standing for June 4th.] Chief Hu must not have gotten the memo.

LiShitaoInGermany: You have a point. Why don’t you write about this in the Global Times?

DOUDOUEast: Hey, who’s Li +yang, Chief Hu? I can’t understand what they’re saying. And by the way, did they apply to “protest”?

MyNonBaldHubby: Chief Hu, when do we mainlanders get to take to the streets?

M_JLT: You’re missing complaints! How could you forget?